Security, trust and discretion have the highest priority in the banking business. The Austrian financial instituton, Uni Credit Bank Austria, is the countries’ first bank group to render their branches free of acoustic barriers. At the customer service desks, users of hearing aids and CI-systems can now directly receive the voice of their dialogue partner in their own preferred volume – given that the hearing apparatus is equipped with a T-coil.

At the Uni Credit Bank Austria, the financial counselling of hearing impaired customers can now be as discreet as with people with normal hearing abilities – and misunderstandings on behalf of acoustic inconveniences are almost non-existant: The advisor speaks in normal volume into a microphone, which is connected to the loop amplifier LA-215. This converts the spoken word and directs it into the small »Cross-the-counter« loop, which is mounted beneath the desk top or in the base. This loop configuration, which was used in the first brach office to be equipped in this way, is strictly dimensioned so that its range is limited to one service point only. Users of the according hearing aids activate the T-coils (T-button) and so “hear by induction” – free of other noise and therefore acoustically safe. 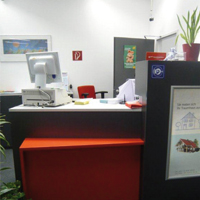 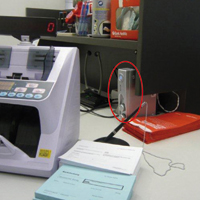 Consultation desk with inductive loop discreetly integrated into the desk body: The range is adapted to the immediate dialogue zone. Customers entering the loop area switch their hearing systems to inductive reception and hear the words of the bank employee, spoken into the microphone, at an individually adjusted volume and without being affected by background noise.

The LA-240 amplifier, visibly positioned on the work surface, converts the words spoken into the microphone into inductive signals and feeds them into a connected ring loop. Users of hearing aids with an integrated T-coil receive the audio signals clearly and free of annoying background noise.

Other branch offices use the compact mobile loop system „LA-90“ from the AUDIOropa product range. This system features an inbuilt induction loop and microphone. According to its operational area, the LA-90 can also be used with- or without Plug & Play accessories, like an additional microphone.

For hearing impaired people, who do not own a hearing aid capable of inductive hearing, special sound amplifying underchin induction-receivers are kept ready for use.

The project had been launched by the Bank in early summer 2012 at the Kaisermühlen pilot site in Vienna. After successful operation, the bank gradually equipped the counter areas of all branches in Austria with barrier-free hearing systems by the end of 2015.

Acceptance of the innovation was already very high to begin with – not only on behalf of the customers but also from the bank’s employees. These emphasize on the easy operation of the systems. The routine maintanance does not involve more than switching the loop amplifier on and using the underchin receiver for a sound check.

By implementing »barrier-free acoustics for inclusion«, the bank has set an effective signal for consequent customer orientation. This results also in a gain of image.

Depending on the infrastructure and interior design, the bank was able to fall back on a wide variety of configurations and systems within the AUDIOropa portfolio: Mobile inductive compact system LA-90 or LA-90-Set, loop amplifier LA-240, for example for operation with the small loop »Cross-the-counter«, table microphone – and receiver with chin strap receiver for hearing impaired people whose hearing aids do not have a T-coil.

Since 2017, the LA-70, a new Class D loop driver, has also been expanding the range of AUDIOropa systems for supplying information counters, receptions or checkout areas.