The BFW Vermittlungskontor GmbH Hamburg engages itself for further prospects of profession for people with special need of support, by offering courses for qualification and services of mediation. Amongst the groups of people supported are also the deaf and hard-of-hearing. 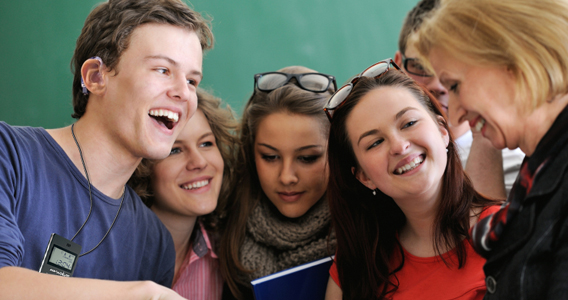 Integrating concept brings the hearing-impaired and normal-hearing people together, in collaborative workshops

Being consequent in following the idea of social integration, the institution, founded by the Berufsförderungswerks Hamburg (foundation for professional advancement Hamburg) lectures hearing impaired and people with normal hearing together, in collaborative workshops. The high level of noise within the rooms often made it very difficult for users of hearing-aids and Cochlear-Implant systems (CI) to follow the lessons. Therefore students with a high level of hearing damage were assigned to special positions which made it easier to lip-read the tutor. In addition, it was sometimes necessary to add a sign language interpreter.

The social intergration of workshop visitors was confined to being present within a collaborative room, following the same objective target. »Interactive communication was only possible in a very limited range«, according to Martin Witt, owner of ›Der Hörladen‹, in Norderstedt. This service provider, offering an extensive portfolio of audiological systems, presented the team-teaching-configuration of 2.4 GHz transmitters and receivers by AUDIOropa to Margret Lüder, advisor and lecturer at the BFW Vermittlungskontor.

Hearing aids or Cochlear-Implant-systems (CI), which have an internal T-coil, are able to receive audio signals transmitted by induction. Depending on the choice of the audio reproduction mode, these hearing systems can either receive only the inductive signal or can also deliver a mixed reception, together with a microphone signal, at the same time. The inductive signal transmission is performed by loop system amplifiers, which - respective to the requested size of the installation - can cover entire halls or small limited areas, either permanently installed or portable. The smallest possible format of a loop is called a neckloop. It is usually worn around the neck by the user. The neckloop transmits the signals from an audio device within a small range to the closely located hearing aid or CI-system.

In the according workshop group of the BFW-Vermittlungskontors, two users of CI-systems, which would be deaf without these, use a neckloop connected to a AUDIOropa tranceiver unit. The tutor and the normal-hearing participants use a transmitter each. The speech-receiving microphones are built into the devices.

Hearing impaired and normal hearing people, able to communicate fluently with each other - almost without barriers

Already while still field-testing, a significant increase of quality of communication was noticeable within the workshop group in question. The gain of social integration did not only show itself during lessons. It also stimulated a expressively free and easy interaction during breaks. Margret Lüder remarked: »At the time when the system was presented, we stood in front of the difficult decision of possibly having to divide the group, because the ›two level-communication‹ caused extensive problems.in conveying the contents of the lessons while keeping up the motivation of all participants«.

With the introduction of the team-teaching-system, the team spirit received a remarkable push, confirms Margret Lüder, which revealed itself with more aplomb, confidence and spontaneousness of the hearing impaired students within the interactive requirements of the lessons.