>>Acoustics withot restrictions<< or: Why people understand each other so well in the Hans-Sachs-Haus in Gelsenkirchen, Germany

»The barrier-free designed public space is an essential requirement for the self-determined participation of life in society...« The council of the city of Gelsenkirchen, Germany, takes this statement seriously – the exemplary implementation of barrier-free acoustics in their new town hall, the »Hans-Sachs-Haus«, proves it. Due to the use of inductive loop systems, users of hearing aids can receive the audio system’s signals directly in their equipment.

Loop systems transform the signals of the audio system into inductive signals and feed these into the loops – copper cables, which are laid out in a ring within the floor of a room. Hearing aids with inbuilt t-coil can be switched to inductive reception (switch position “T”) which then receive the signals, made audible again by according conversion. The benefit: The hearing aid’s microphone can be switched off entirely, so that the listener hears only the signals of the audio system – free of any environmental sounds and other interferences like reverb or other acoustic influences.

Talking to the media technicians, which installed this technology in the town hall of Gelsenkirchen, the advantages of using loop systems by AUDIOropa become clear.

What is prominent about the project »Loop systems for the Hans-Sachs-Haus«?

»With the AUDIOropa-systems, we achieved an audio quality, which is considerably above that of other systems known to us. The clear, undisturbed and homogeneous transmission of the inductive signals is for us media technicians the most distinctive aspect. «

What is the reason for this winning margin in quality?

»Especially the loop amplifiers of the type PROLOOP LOS* deliver top performance. Apart from that, the consistently perfect configuration of the rooms might also be a quality factor. The ground level courtyard alone, with over 500 square metres, was supplied by three LOS*-amplifiers. A total amount of 670 metres of copper cable for the master- and slave loops provide the room with highly stable inductive signals. Users of hearing aids or other induction receivers can walk through the courtyard, listening inductively, without the slightest fluctuation in quality.«

Regarding loop systems, what does »LOS« mean?

»The Low-Overspil-System, LOS, was developed in order to limit the transmission range of inductive signals, so that they keep within the loop. When using several loop systems in adjacent rooms, the LOS configuration precludes the signals from blending into each other. This effect is achieved by using two phase-shifted loop amplifiers with a master loop and a slave loop. This layout has also a desirable side effect: The stability and homogeneity of the signals is superior to that of simple single loops.«

How throroughly has the new Hans-Sachs-Haus been supplied with loop systems?

»Apart from the court yard, two loop systems of more than 200 square metres each have been installed in the ground level citizen forum. On the second floor, loop systems provide for the entire council room including its gallery and on the fourth floor several meeting rooms, which are used by committees and parliamentary groups, offer inductive listening..« 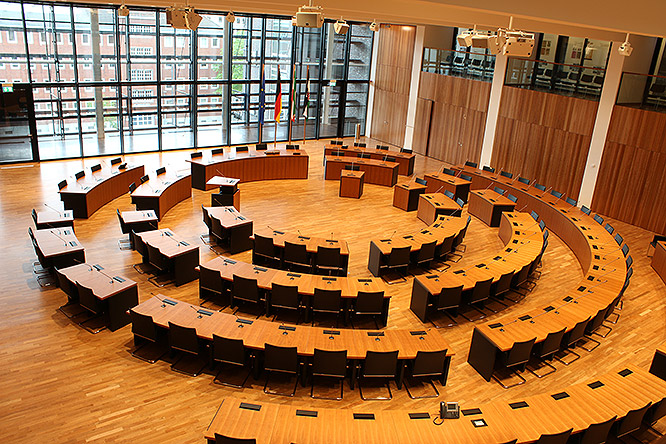 For example the council hall: Two semi-loops, consisting of a master- and a slave loop, both connected to a single PROLOOP LOS amplifier, supply the hall’s total area of 400 square metres. In addition, two galleries – with a total of 100 square metres – are also equipped with a master/slave combination.

Inductive listening is not only for users of hearing aids.

»That is correct. The concept of barrier-free acoustics also includes the deaf, who are able to hear by means of their Cochlea-Implant – and in general all town hall visitors with impaired hearing – also those, which do not have hearing aids. For the latter, the Hans-Sachs-Haus hands out underchin-receivers with inbuilt induction coils.«

By the way: The systems are permanently in operation. This means: Whatever is spoken over the public address system is also available as inductive signals in the respective areas.«

And the finishing touch?

»Looking at the huge room sizes, in which approximately two and a half kilometres of loop cable have been laid out, fed by eleven high-tech loop amplifiers, then ...

... the finishing touch, in sense of a completing aspect, must be the compact small-loop system LA-90 in the entry of the foyer. In situations of counselling and giving information, it supplies a limited area with the necessary inductive signals between the counsellor and the visiting hearing aid users..« 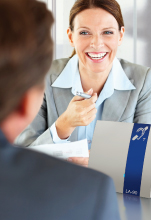 »LA-90«, the compact portable loop system for the inductive transmission of speech directly into the hearing aid within a small range.